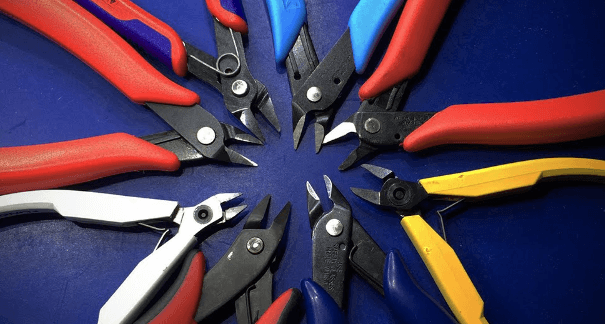 Flush Vs Side Cutters: What’s the Difference?

Flush cutters and side cutters are the names given to tools that are commonly used to cut wire, particularly in the jewellery industry. These terms can sometimes be used in a relatively imprecise manner, and direct comparisons are often not applicable. However, a flush cutter usually refers to a member of a type of side cutter, while a side cutter is normally a reference to a type of pliers.

Flush cutters and side cutters are both variations of pliers, basic hand tools that are also sometimes referred to as diagonal pliers. These tools are essentially a form of lever featuring two arms that are hinged at a fulcrum. When the handles of the tool are squeezed by the user, the tool’s opposite ends close together and grip, crush or cut the object that is squeezed between them.

Side cutters are the term given to a type of pliers that come with two bevelled edges on both ends. The closing of the handles causes the edges to align precisely, thus wedging or pinching whatever object is held between them. This is not the same action that is generated by scissors, which shear objects by causing the blades to pass by each other.

The flat side of the pliers’ cutting end, also known as the flush, tends to be located on one particular side, which is what gives the tool its name. Side cutters are available in a wide array of different sizes, but the type used in the manufacture of jewellery tends to be especially small in order to allow for very precise work.

Flush cutters gain their name due to the fact that they are designed with the intention of being used to snip the end of thin pieces of wire, leaving it flush (or even). There are major variations in design and size, but they are all intended to leave a smooth surface on the cut wire to allow it then be soldered or shaped.

The use of some cutter types can result in the wire that has been cut being left with a ragged or angled end. For the purposes of ensuring a smoother cut, flush cutters come with sharper, finer edges that allow them to avoid leaving ridges on wires, which are sometimes known as pinch.

What to keep in mind

Because leaving a clean cut is dependent on how sharp their edges are, manufacturers design flush cutters for a specific thickness of the wire. If their recommended range is exceeded, there is the risk of the cutting edges being dented, which could see their overall performance be impaired quite significantly. For instance, if a very small pair of flush cutters is used on a very thick piece of wire, the wire could be left with a noticeable pinch in addition to causing damage to the cutters.

It is also a good idea to keep the hardness of the wire in mind. Memory wire can be hard, and memory wire cutters are specifically produced to deal with it.

It is important to choose the right cutter and to know the difference between flush and side cutters, in order to achieve the desired result when cutting wires.